would never be farmland again

While returning from Manhattan to the Bronx this morning on a bicycle I noticed this brickwork from the Third Avenue Bridge. 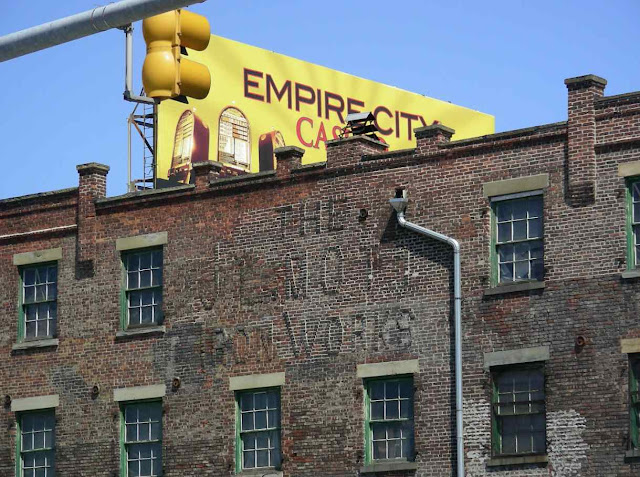 The JL Mott Iron Works. This area is so steeped in industrial history. The JL stands for Jordan Lawrence Jr. 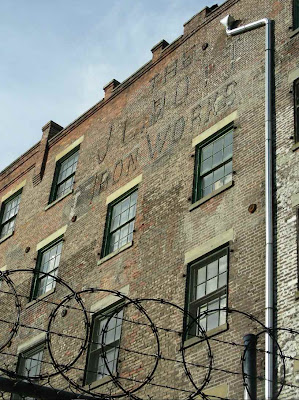 Jordan’s grandfather Jacob was at one-time acting New York Mayor while his father, the original Jordan Lawrence was an influential industrialist and inventor of many practical things, the coal burning stove amongst them. It was the Father JL who purchased his first plot of land here in 1828 and established his 1841 iron works one block over from here when the railroads finally went through. His foundry was right across Third Avenue from the Bruckner Bar, where 133rd and 134th once met the Harlem River. Leading the machine age into our neighborhood did not make him a popular man at the time.
In those days the south Bronx was farmland; green, pristine, quiet. “The City” was down by the Village. It was bad enough he named this area after himself, “Mott Haven”, but now here he was building a dirty factory and the locals resented it. Still, his expansion from iron fences and gates into the finest quality bathroom products helped him catch on quickly, and soon he was selling bathtubs to the WhiteHouse and iron for the Capitol Building dome. His factory even crafted two much larger than life size cast iron sculptures of pointer dogs to cap La Casa de los Perros (House of the Dogs) a now-famous building in Guadalajara, Mexico, which was quite a distance away back in 1896. 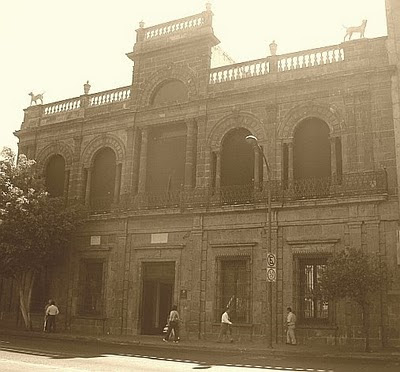 But his greatest influence was right here at home. 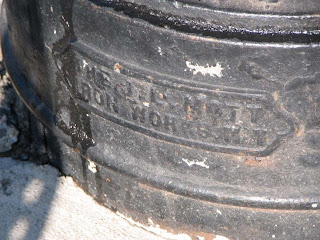 As a supplier of essential New York City municipal items like manhole covers, sewer grates and cast iron light posts, JL Sr. made gobs of money and bought up much of the south Bronx, then turned it all over to JL Jr. who expanded his fathers business by building the brick extension by the Bruckner Bar, still standing and emblazoned in brick with his name. (Like father, like son I guess.)
We know he did this about the same time the ClockTower was being built because the buildings are in near identical Richardsonian Romanesque style. 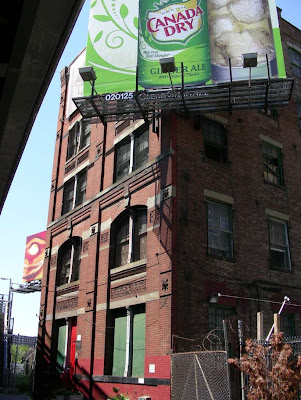 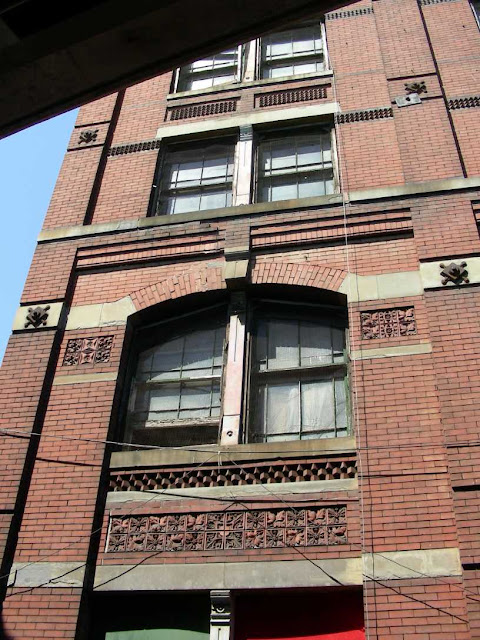 http://clocktowertenants.com/2010/07/richardsonian-romanesque-folks.html
JL Mott IronWorks was so successful they even launched a leather bound product catalog in 1878. 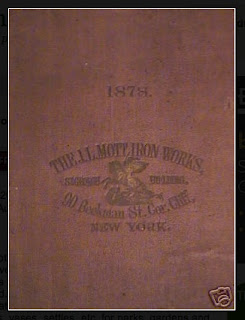 This map from 1885, the year the ClockTower broke ground, shows Mott’s impressive influence. He turned rolling farmland into an urban, industrial street grid in only 40 years with factory’s at every corner, first metal works, saw mills and stone yards, later piano and furniture and ice factories. 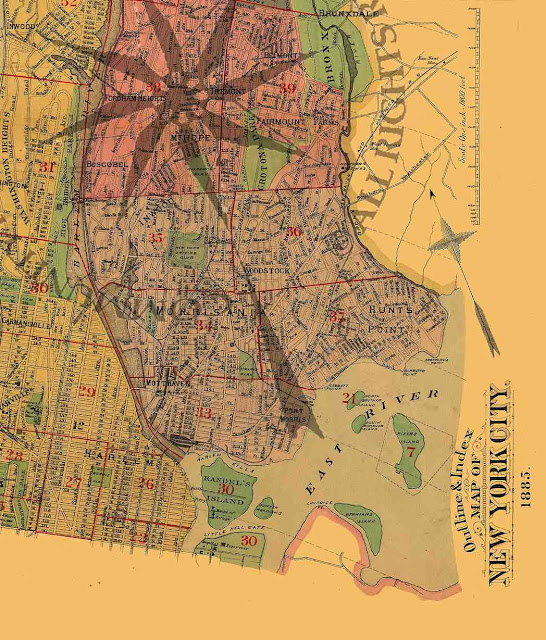 The south Bronx would never be farmland again. 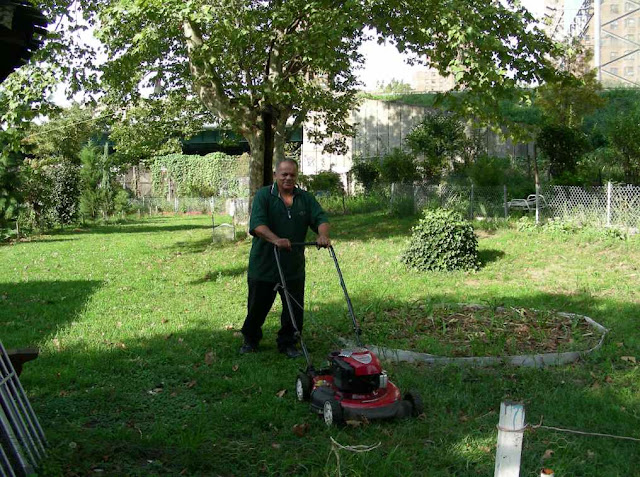 Unless you count José’s garden.
Posted by Gregory No comments:
Labels: History, Jose'sGarden 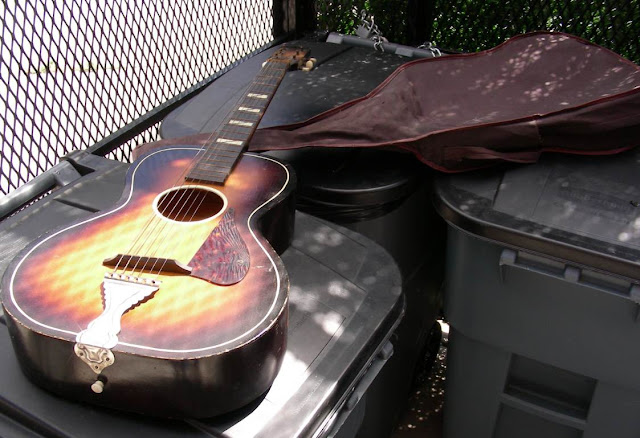 vino with a touch of building gossip 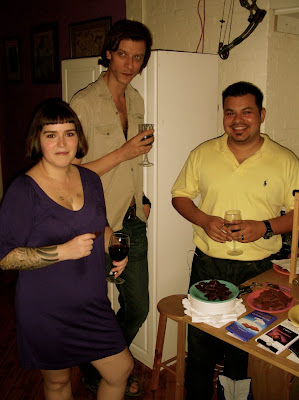 The winos of the ClockTower gathered last evening in the home of our generous and friendly hosts Javi and Cori for a memorable pairing of chocolates and wine. Cori, admittedly not the wino Javi is proud to be, provided lush, bluecheese and crusty bread appetizers drizzled with honey to get us started, while Javi poured a delicious cabernet from DeLoach. Naturally it had been decanted earlier so it had already caught its breath and was ready to go. Javi’s a pro.

Typical of fruit-forward reds from California, the DeLoach exhibited a deep ruby color and cascading flavors of plum and raspberry with just a touch of black pepper and the oak in which it was stored. He was right, it was perfect with the dark, Lindt chocolate. 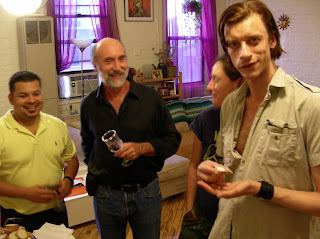 Also surprisingly supportive of the wine was another dark chocolate also from Lindt but this one infused with the warmth of red chile peppers. Amazing, this one was my favorite. The sweet rich burst of cocoa slowly gives way to a sneaky, expanding burn from the chile, so a sip of the very nice red can quash the heat and set you up for the next chocolate bite. I assure you, the chatty, enthusiastic crowd approved. 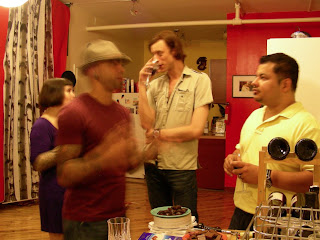 But Javi and Cori were not through.
For a killer finish to cap the evening they poured a golden white port from Dow with a nutty rich aroma and a perceived viscosity reminiscent of the juice poured from canned peaches. Fantastic! These straight forward flavors paired beautifully with the milk chocolate this time---not too complex---just a satisfying rush of grape and cocoa to send us all back out into the night in high spirits. This was fun.

So there you have it; a little vino with a touch of building gossip and some very good tunes in the background... a happy night with the neighbors and I hope we all do it again. And if you missed this one make time for the next. Javi and Cori did this right. Our thanks to 311! 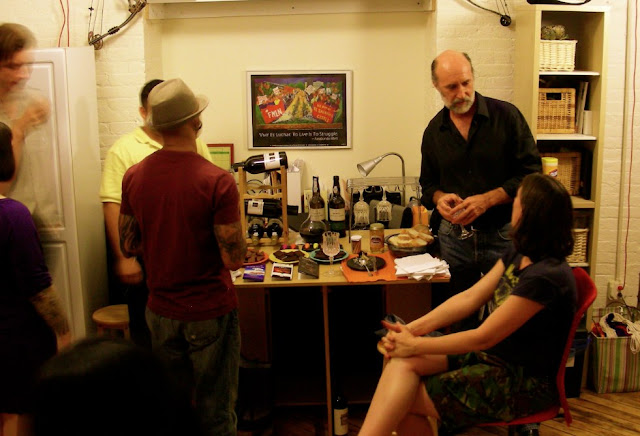 There are three of them, actually... 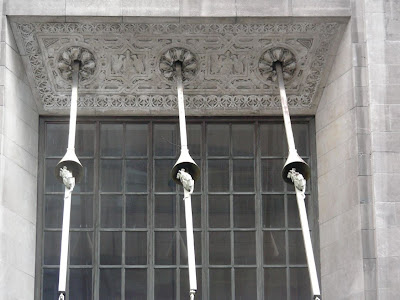 ...at the entry to the Graybar building on the Lexington Avenue side of Grand Central Terminal. Specially designed cones are often placed on the large hawser ropes used to tie up freighters when they are in port, so rats can’t walk the tightrope and get onboard. 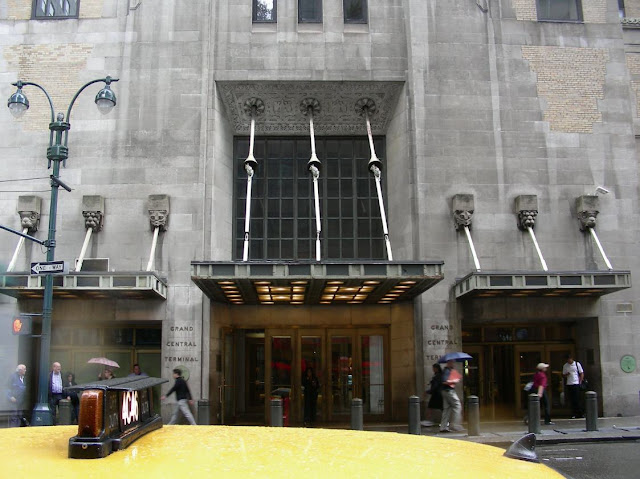 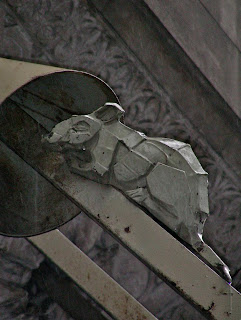 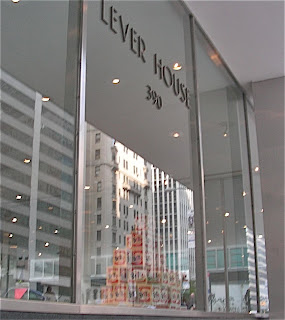 Lever House...at 390 Park Avenue... is the quintessential and seminal glass box International Style skyscraper according to the design principles of Ludwig Mies van der Rohe... It is the pioneer curtain wall skyscraper in New York City. The 92 meters tall building features an innovative courtyard and public space. At the moment that space is holding BRILLO BOX. 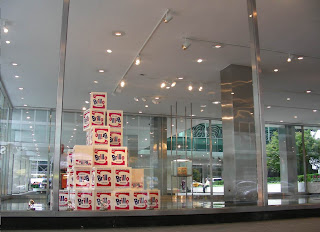 Artist James Harvey designed the Brillo box in 1961 when the company needed a package redesign. Three years later on April 21st, 1964 he walked in to Warhol's exhibit at the Stable Gallery and saw his design being displayed as art. Harvey, an abstract expressionist painter, separated his commercial art work from his real art whereas Warhol integrated the two. By refusing to separate fine art and commerce, Warhol, who had also been a commercial artist during the 1950s, turned Harvey’s Brillo box into BRILLO BOX. 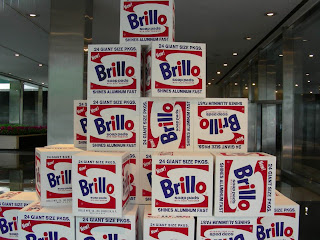 Where is this rat?  Tell us in the comments. 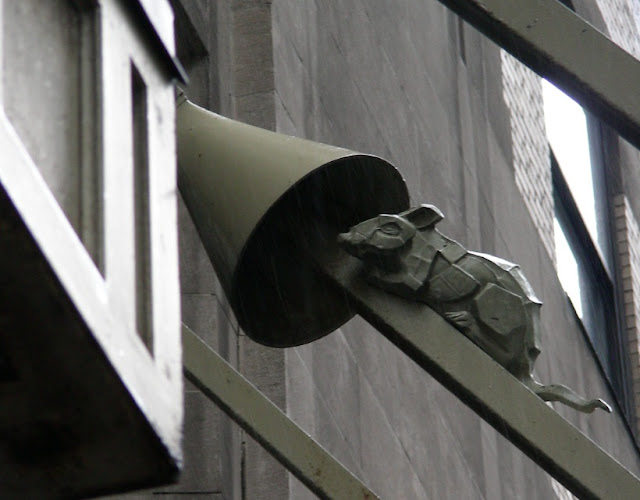 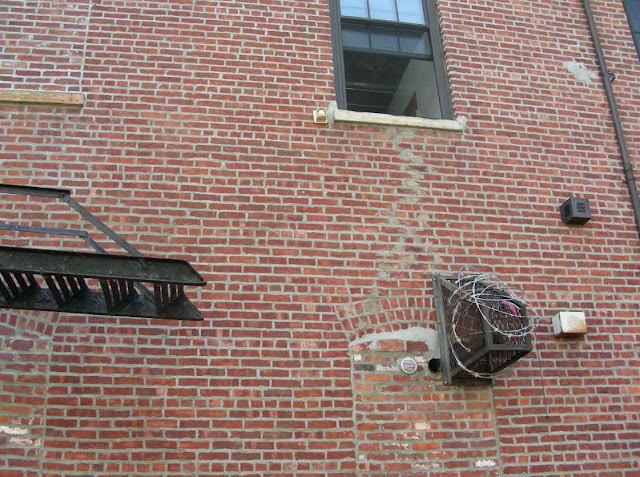 That first step is murder.
Posted by Gregory No comments:
Labels: SoBro 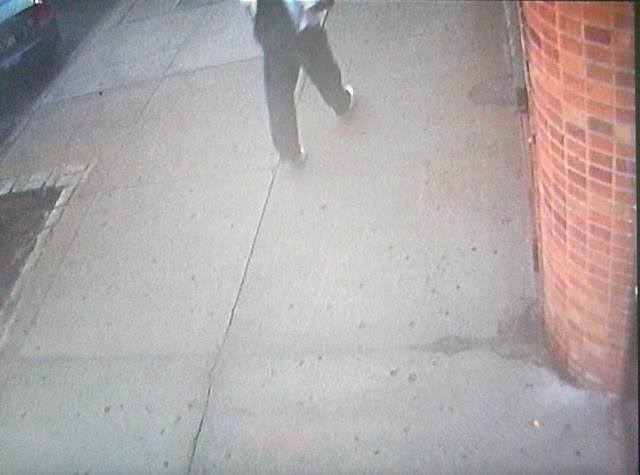 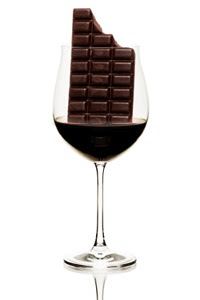 Come join us for a sensually indulgent pairing of chocolate & grapes in a relaxed, casual atmosphere amongst friends and neighbors.
Kindly RSVP to jemadrid@me.com by Monday 8/23
Posted by Gregory No comments:
Labels: Events 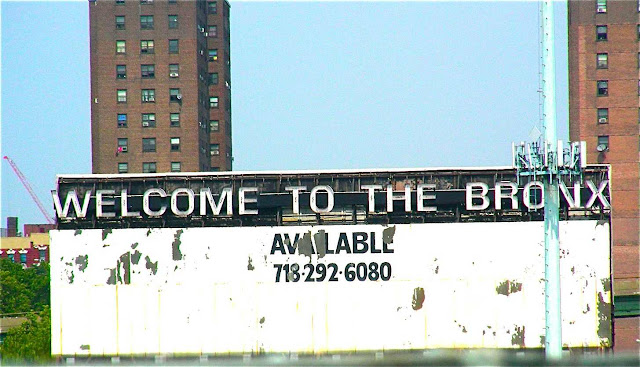