A fire broke out 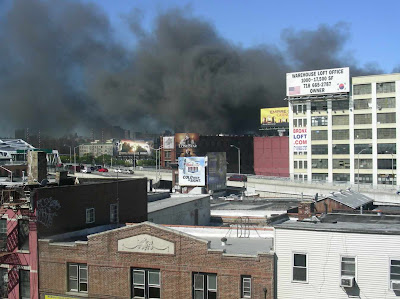 A fire broke out at 11:38 this morning underneath the 138th Street Railroad Bridge and ClockTowerTenants was there. I shot this (above) from my window. There were no injuries, but the flames licked 50 feet high at their peak and thick, black smoke blanketed the upper Manhattan landscape. 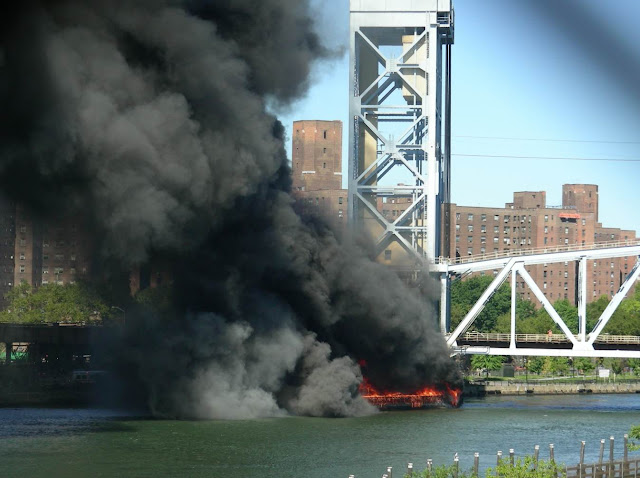 In this aerial view, the wooden fender island that burned is seen clearly, just south of the bridge. 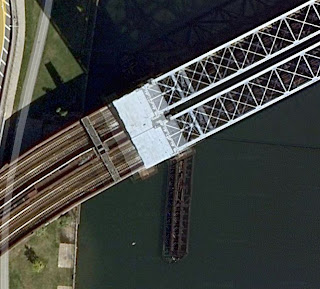 Early speculation on the Third Avenue Bridge (from where these first few photos were taken) was that a barge or some other vessel was aflame. Later in the day officials suggested that the fire might have resulted from a blown transformer at the base of the bridge. To this observer, it appeared the fender-island itself was aflame. At present the official cause is still unknown, but the fire was quite spectacular. 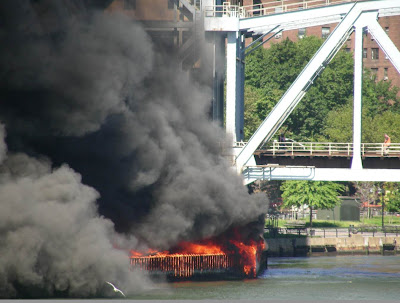 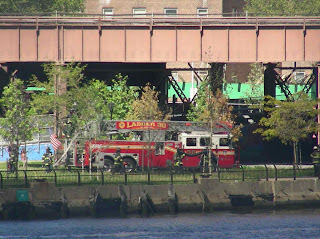 After watching from the Third Avenue Bridge, I left that perch and bicycled around to the foot of Park Avenue. 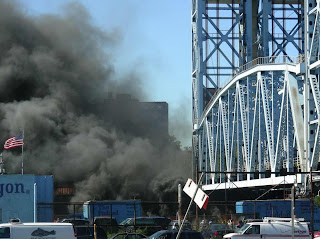 There, both firefighters in trucks and the locals took photos and joked that the firetrucks couldn’t even get close. 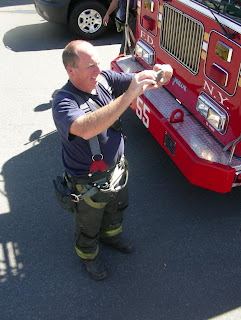 The rail bridge was closed and so there was no way to get across the Deegan. 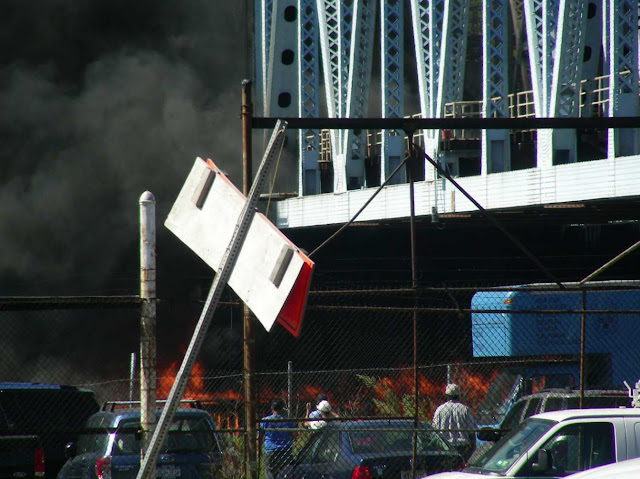 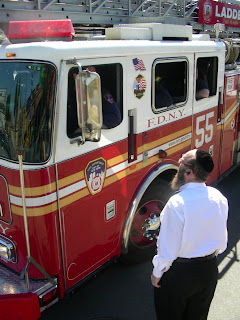 ….and city government helicopters were on the scene…. 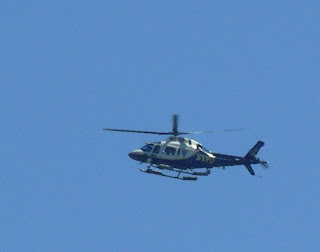 …... radioing ahead for a NYC Fireboat.
http://www.nycfireboat.com/
It appeared the creosote-soaked wooden pilings that form the perimeter of the fender-island provided the primary fuel. 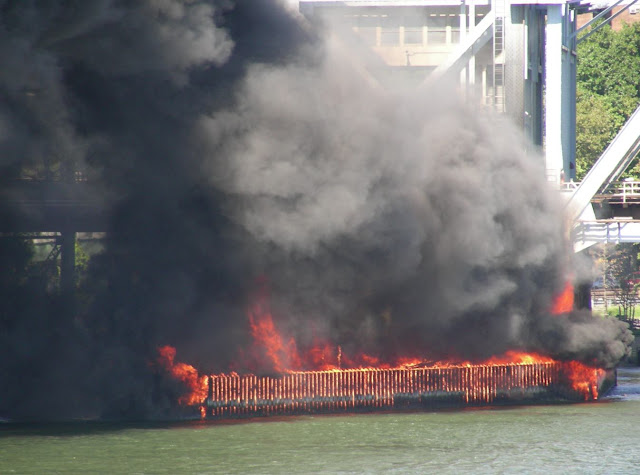 That wood protects the bridge foundation from iceflows in winter and impacts from river vessels year round. I decided to ride on ahead and take a look from the 138th Street bridge. 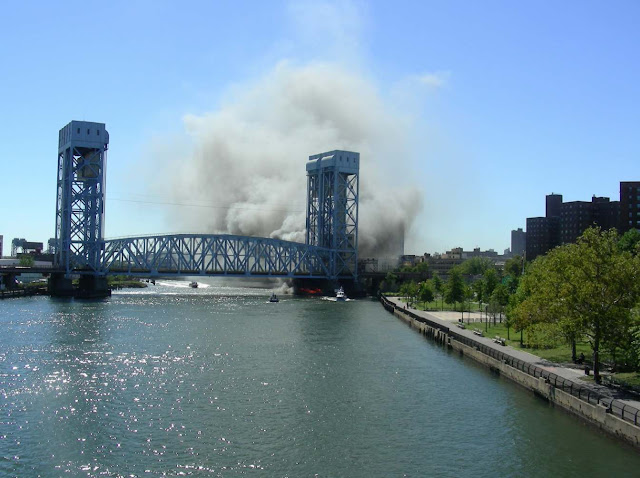 The Police set up a temporary perimieter…. 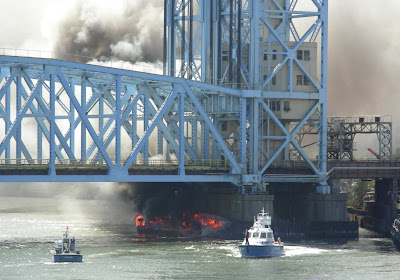 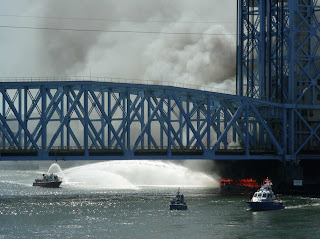 …..and immediately demonstrated how effective and useful these firefighting tools really are. 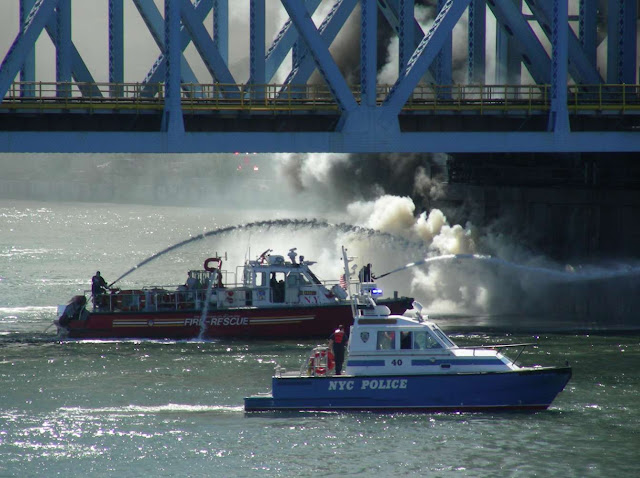 The boat started its pumps to cycle river water through its hoses and the prodigious onslaught of water almost immediately turned the tide of the fire. 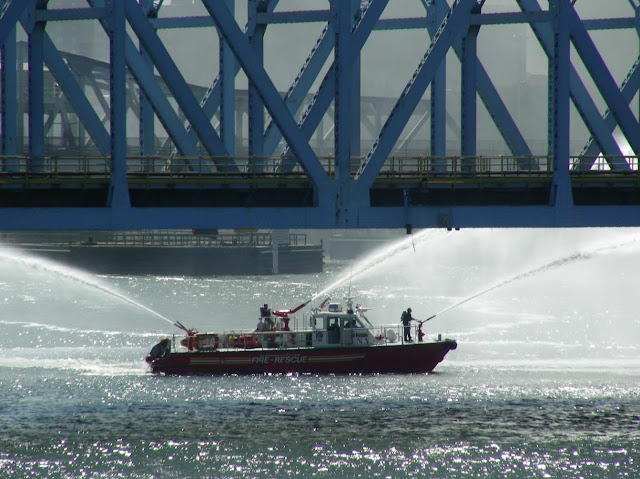 Within minutes it was all steam and white smoke, a sign the worst was behind us. 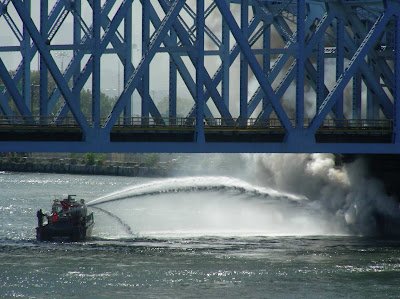 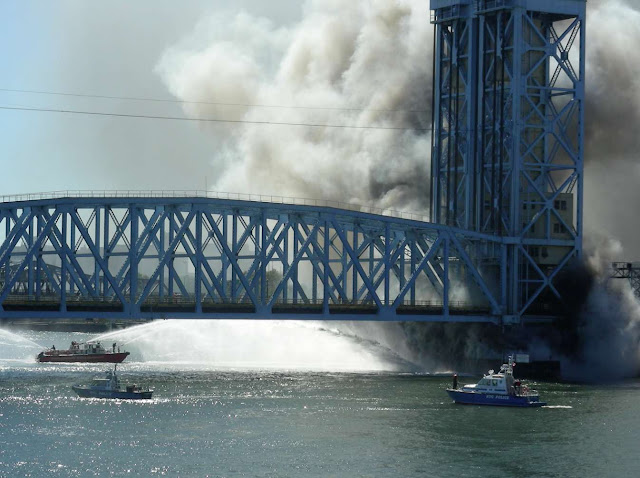 From the NYTimes:
The bridge, built of steel and reinforced concrete, was constructed in the mid-1950s by the New York Central Railroad, and was intended to also serve trains from the New York, New Haven and Hartford Railroad. It was the third such railroad bridge to be built on the site, which has been used to bring trains in and out of Manhattan since the Civil War era. 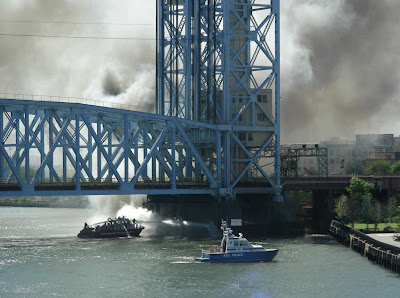