anyway, that’s what I think

The Electronic Frontier Foundation is a San Francisco based digital rights crusader.

They’ve declared this Copyright Week, and they’ve put a 6 principle manifesto on their website.

The EFF makes it sound creepy but the truth is less sensational.

The graphic artists and authors and musicians and their business allies are the ones “in the backroom” consulting with government. Private negotiation is never transparent. The public doesn’t vote on the subway fare, either. Get over it.

But do you really want research free of all costs entirely so we have to pay more in taxes? Or how about just let those who want copies pay the small fee.

If Samsung should be lawfully required to code their operating system so it will also run on an iPhone, you might as well demand that Chevy manufacture Ford-compatible parts. Get over this, too. Never gonna happen.

Absolutely, as long as that “breathing space” does not include feeding links to digital content that artists own and are trying to sell.

And not incidentally, making million$ on their work through on-page advertising. I’m looking at you, Google.

Freedom to create is essential. But real-life accountability on the internet--just as in our own neighborhood--will make them both better places when everyone is held a bit more accountable to their actions. 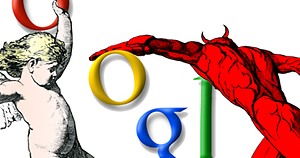